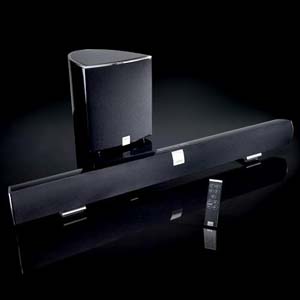 Most people are under the impression that a 5.1 or 7.1 surround system can offer higher quality sound than that of a sound bar. They are right. However, getting such an audio ensemble is not always an option, especially if you have a small room or if you hate stumbling across wires.

Besides this, the price of a full surround system is much higher than that of a sound bar. If you are trying to buy some reliable speakers on a budget, if you are tired of loose wires or if you simply want something between a 2.1 and a 5.1 system, you can start searching for a reliable sound bar system.

The Vizio VSB210WS might be exactly what you need and one of its best features is the wireless subwoofer.

This basically means that you just have to plug the system in and you can move the subwoofer wherever you want without being constricted by wires. If you look at the company as a whole, you will see that they are mostly known for creating TV sets. Their involvement in sound systems is somewhat recent and the Vizio VSB210WS is basically a test of their abilities.As far as price goes, you won’t have to pay much for this system; in fact, it costs only around $350, but is it any good?

A strong advantage that is offered by the Vizio is the design. It is easy to fit to in tight spaces and it can look great on the side of a TV made by the same company or which has a similar shape and color. You won’t have to make room for it and it will be a great addition to your room. The system is completely black, expect for the Vizio badge which stands out in the middle. The sound bar is similar in design with the subwoofer and they look great together even if most people end up separating them. Both of the components are made from glossy black plastic and the sound bar can be mounted on the wall by flipping its metal feet over.

After you decide where to place it, you can take a look at the controls which are placed on the top of the soundbar. 9 buttons are present here: power, input, volume down, volume up, mute, TVVOL which enables TruVolume and TSHD which enables or disables the TruSurround HD feature. However, most people don’t use these buttons because you will receive a remote control which comes with the same functions and a couple more: increasing and decreasing the volume of the subwoofer.

The sound bar contains a total of 4 mini speakers, measuring 3 inches each and two tweeters which measure three quarters of an inch each. Dual 15 watt amplifiers are used for powering the system. As for the subwoofer, you will be happy to know that it has a 6 and a half inch speaker, which is not bad for a system the size of Vizio. The best feature of the subwoofer is obviously its wireless connection with the rest of the system. You can put these two components at 60 feet apart and the subwoofer will still function, as long as the line of sight is not interrupted.

When you first open the box, you will see the subwoofer, the sound bar, two power supplies, the RCA cable, the remote control and the manual. You just have to connect a few cables and as soon as you plug in the power cord, you will be good to go. The subwoofer will get an instant connection with the sound bar and one of the best parts about it is that once you turn off the sound bar, the entire system will shut down.

The LED system is an interesting part of the Vizio VSB210WS. It contains 10 LEDs, 7 of which are white, 2 blue and 1 orange. You need to figure out how these LEDs work and this is more complicated than it seems. 6 white LEDs have the role of showing you the current volume. It seems that each one of them has three levels of brightness and if you multiply that by 6, you will be able to notice 18 levels of visual response from your audio system every time you change the volume. If these LEDs are flashing, they are showing you the volume of the subwoofer, which can be modified individually.

The orange LED will show you if the subwoofer is connected or if it gets the right signal from the sound bar, three other LEDs will show you your current input and the last two will activate along with the TruVolume and TruSurroundHD features. This system can be quite confusing at first, but you will eventually get used to it. In fact, you might even ignore it altogether because the information it offers is not that important. These lights won’t be able to capture your attention because they don’t stay on more than 5 seconds.

One of the downsides of the Vizio VSB210WS is that it won’t act as a surround system, even if it was supposed to. This is a small system, but you should be able to hear it in the whole room with the same intensity. The only way to achieve maximum performance is to move the subwoofer around until you are happy with the result.

If your room is too large, you might have to settle with what you have.

Evaluating the sound that comes from this system is not an easy task. This is exactly why watching different programs is a must. For example, the TruVolume leveling system can only be noticed during commercials. After you’ve watched a movie for an hour or so, you will be used to certain types of sounds. When the commercials kick in, you won’t want them to play as loud as the movie you are watching and this is where the TruVolume makes the difference. However, the result is not always perfect. You might notice some changes in some cases, while other commercials pass by undetected. Even worst than this is when the sound of your movie gets lowered because the TruVolume feature thought it was a commercial. So, this feature is not perfect, but it performs properly every once in a while. It all depends on how sensitive you are.

The second important feature is the TruSurroundHD effect. You will need to set up some proper conditions if you want to get the best out of this element, but you shouldn’t have high hopes. Even in ideal circumstances, a person who is used to watching a movie with a 5.1 surround system will notice the difference. Even so, the Vizio VSB210WS is far better than most 2.1 systems and it will offer the illusion of surround system. One of the best parts of the system is that you can watch a movie without having to struggle to hear the dialog among gunshots and environmental sounds. If you are used to watching movies without a sound system, you will often have problems hearing the dialog because of other surrounding sounds which are part of the movie. With this sound system, the dialog volume will be enhanced and you will have a far better experience.

All in all, the TruSurroundHD system gets a plus because it is far better than what you expect from an audio system which is not 5.1 or 7.1. These effects can be noticed during movies, when listening to music or even when watching the sports channel. The Vizio is a great system for classical music. It seems to hit every note precisely and you can turn the volume up without losing quality. This is probably the best way to notice the quality of the system and you won’t be disappointed by it if you plan on listening to your favorite CDs.

In conclusion, the Vizio VSB210WS is a definite “buy it now” product. The price is more than reasonable, the quality of the sound can’t be judged when compared to regular 2.1 systems and you get the advantage offered by the wireless subwoofer. The only negative part about this system is that you won’t get full surround sound, which is virtually impossible without at least 5 speakers. Even so, the Vizio performs well with what it has and it also looks great no matter where you place it. Luckily, the connection between the sound bar and the subwoofer is strong so you can play around when searching for a location until you find the perfect spot.