Vizio is continuing its quest in expanding its product portfolio beyond just televisions with the introduction of its own wireless home theater system the Vizio VHT510. Instead of just being another soundbar, Vizio is actually going one step higher by coming out with this powerful soundbar which also has a wireless subwoofer and rear speakers to go with it for a simple and discrete 5.1 channel surround. With a built-in amplifier and audio receiver as well, you might just have the complete home theater system with the Vizio VHT510 and we are here to find out if it you can get some brilliant sound from this baby.

This soundbar was obviously made with an intention of fitting well with HDTVs that are sized between 38 to 42 inches as the soundbar has measurements of  4.5 x 40 x 4.3 inches. This doesn’t mean the 7.8 pound soundbar won’t go well with bigger TVs, but it certainly wouldn’t look as good. The Vizio VHT510’s subwoofer is 13 x 11.2 x 11.9 inches and it tips the scale at 14.6 pounds meanwhile the pair of satellites are petite at 7.5 x 2. X 11.9 inches while only weighing 1.6 pounds each. The system is easy for those who wish to mount them permanently as there are screw and hook mounting holes for exactly that. On the front of the soundbar the soft black grille helps cover the two 3-inch and two 2.75-inch drivers. The two 0.75-inch tweeters are meanwhile protected by a circular metal grill on both ends of the Vizio VHT510’s soundbar. On the centre of the bar you will find Vizio’s logo and a few indicator lights to cheer up the day. However the more important lights – LEDs that light up to show volume and balance levels as well as input modes – which come in blue can be found behind the grille under the metal rectangle.  The subwoofer’s design is not that different from the soundbar’s design as they sport the same design with the vertically standing semi-cylinders with soft black grilles. On the other hand, the satellites share the hard-grilled 0.75-inch tweeters as the Vizio VHT 510’s soundbar.

On the back of the soundbar you see the array of connections and options that comes along with it. It offers both optical and stereo RCA audio inputs, and of course a connector for power and a switch to set client/hub mode. This switch means you can use the soundbar with other subwoofers or other wireless audio devices. Nevertheless it leaves as wanting as it doesn’t have a 3.5mm auxiliary input to allow you to directly connect your iPod or smarthpone for instance.Features
The Vizio VHT510 Wireless Home Theater System has three SRS options when it is in the standard rear surround mode namely SRS TruVolume, SRS TruSurround HD and SRS WOW HD. SRS TruVolume helps you overcome the volume difference you usually have between channels and also between the TV program and the ads. SRS TruSurround HD is recommended for movies as it enhances the sound field of the system while the SRS WOW is a feature of the SRS that is recommended for use when listening to music.

The Vizio VHT510 Wireless Home Theater System also comes with a rounded remote control which is very nice to hold. There are many controls too for a soundbar system. You will find the Power, Mute, Volume and Video Controls like Play and Pause on the front. However on closer inspection, sliding out a small panel hidden in the remote brings us to more controls like input selection buttons and even dedicated volume controls for the subwoofer, bass , treble and rear channels among others. Even iPod controls are provided just in case you decide to get Vizio’s optional wireless iPod dock. The slide out panel was quite interesting, but we think it would have been better to have more controls on the main frame itself. Being black in color and with no back lights make the buttons hard to see in the dark too.

The set up process for this soundbar is pretty simple. The easiest way in our opinion to connect your soundbar is by connecting all your components like your Blu-ray player or game system to your TV and then connecting your TV’s fiber optic digital output or stereo analog outputs. However you should first check if your TV’s fiber optic output is able to let DTS sound to pass through it because if not you would be losing the 5.1 channel discrete surround sound the Vizio VHT510 offers. So once you have your input source covered, all that’s left are the subwoofer and rear speakers that are wireless remember. The built-in wireless receiver syncs the subwoofer to the system and then you would have to connect the rear speakers to it with the given jacks. That shouldn’t be tough as the rear speakers are labeled to distinguish left and right channels. 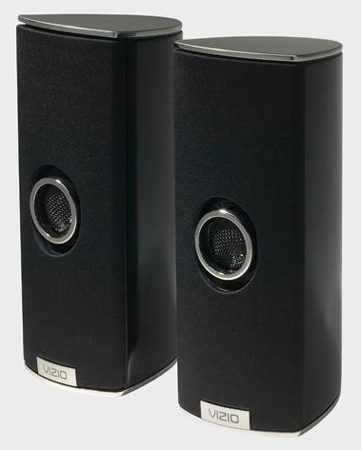 The first feeling you get from the Vizio VHT510 wireless home theater system is that it has decent sound quality considering the price its being shipped for. However there was some brittleness when you are in the high volume range but with the press of a button on the remote to bring down the treble you’ll be good. It offers pretty good bass that doesn’t make your windows vibrate plus it is able to reproduce dialogs clearly. When tested for music performance, the soundbar provides a more immersive effect thanks to the existence of the rear channel. However you still get most of the musical action from the front three channels.

This wireless home theater system does offer real surround sound. The Vizio VHT510 also offers solid power from the subwoofer. Since part of the system is wireless, it is very easy to set up too. It’s also a nice touch that the system comes with mounting options already provided.

However the Vizio VHT510 does not have 3.5mm input. It’s not completely wireless at you would first expect as the satellites aren’t. The subwoofer does great in terms of giving deep bass but needs a tighter bass image.