VIZIO has a new budget-friendly VSB200 Sound Bar with a stylish outlook and delivers the latest technology for virtualization and volume leveling.

The VIZIO VSB200 is a flat panel sound bar with speaker bar frequency response at 80Hz to 20kHz. This high definition sound bar comes with 2x pre-installed stand and mount base with screws attached, and included one RCA Stereo Cable.

Inside, there are for 3” high-efficiency hand built mid/bass transducers and two 0.75” high performance aluminum dome neodymium tweeters. The amplifier is an integrated class D at 15×2 channel with .01% THD.

The rear panel has an optical audio input port for connections from devices such as a home theater system, amplifier, receiver, set top box or DVD player, while the analog sub-out is to be connected to an amplified subwoofer input. Users are warned against connecting the device directly to another home theater system. There are two analog audio inputs.

Some of the basic volume control buttons are found on the top panel. The LED Array is located at the lower right side of the sound bar. There are a total of 10 LEDs, for power indicators, volume indicators with white lights and input indicators with blue lights. There are also indicators for the functioning of the SRS TruVolume and SRS TSHD.

Purchase comes with a remote control and the sensor is located at the lower right side of the sound bar. The remote control has the same buttons as that on the top panel, with a power on/off button, an input button to select the source, volume controls, TVOL button to set the sound system to have control over the level of the audio output and a TSHD button that toggles SRS TruSurround HD on and off. The TVOL prevents commercials on regular programming from sounding louder than the volume of the program being viewed with the SRS TruVolume function.

Setting up the VIZIO VSB200

The VIZIO VSB200 can either be kept on the stand base or mounted on the wall. The two feet provided with the HD sound bar can be used as brackets if it is to be wall mounted. The user manual provided has good photographed illustrations to show how it should be done.
While most connections are obvious, users need to set the source device output mode to PCM when using the Optical Input on the sound bar for connections to a computer. Also, users may need to get a separate Stereo Mini-Jack to RCA stereo cable to enable the transfer. 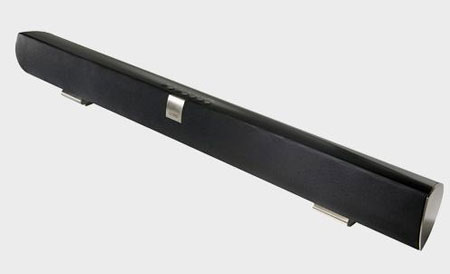 The SRS TruVolume feature works well, and users may find that annoying advertisement sounds do not amplify suddenly like most advertisements would during normal viewing. If users disable the sound leveler, it may produce an even better theater-like sound. Also, using the “fixed” setting in the TV output gives a clean bass sound.

While it does not replace a full surround sound system, this sound bar works reasonably well for a small room even with the lack of an additional subwoofer. It is more of an enhancer for stereo sounds, and an additional subwoofer should be deployed if users want a deeper bass. Users should not expect this system to works just like a real 5.1-channel.

There is no subwoofer so the bass is not sufficient, unlike the VSB210WS system. It is not wireless either. Compared product to product, the VSB210WS is definitely a more superior product, but this VSB200 is still good enough to enhance the stereo sounds of a TV. However, the SRS TruVolume does work most of the time and users may make some nice discoveries to improve the performance, such as disabling the sound leveler for a better theater-like sound.
Also, there is a layer of thin foam which should be removed to allow the remote control work better, because the IR on this sound bar panel is blocked by the thin foam.

This VIZIO model is suitable as a low budget sound bar, with hassle free set ups and minimal wiring and cabling. It is meant to enhance the sounds on a tv, not meant as a true surround sound system for a full home theater set up.