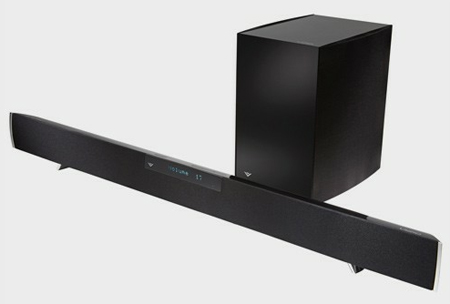 The Vizio VHT215 is a testament to how far Vizio has come in the soundbar industry since its first soundbar the Vizio VHT210 not too long ago. Being the latest soundbar out of Vizio’s stables it not only looks great it’s also packed with a variety of connectivity options. With the endless options to play with the audio controls this soundbar is out there to leave its mark.

Design
Vizio VHT215 has to be one of the best looking audio bars out there. It is not only more refined than the sound bars that Vizio have made in the past but its glossy black finish also adds some style to it. On the front panel, a dark gray speaker grille is almost the only thing in sight. The dimensions of this audio bar are 40.1 inch wide x 3.3 inch tall x 2.1 inch thick and this means it is an extremely slim one. The Vizio VHT215 soundbar has metal feet coming out from its bottom at a certain angle thus adding an interesting look to its already cool design. These feet provide some serious stability as well. It was also pleasing to note that the soundbar comes with a front panel display so the user can easily identify the volume level or even the input mode currently in use.

The subwoofer unit measures in at 8.5 inch wide x 12.8 inch tall x 11.3 inch thick and has also been given the same glossy black finish by Vizio. Since it’s a wireless subwoofer and is also sized reasonably, it could go anywhere in the living room as long as it is within range. The remote control that came together with the Vizio VHT215 has got a simple yet complete design. It only has a few buttons one each for volume up and down, one for power and another for mute. However, sliding out a panel on the bottom reveals additional controls for adjusting things like bass, treble and subwoofer levels. You can also select the input of your choice or change between one of the few available modes.

Features
As mentioned early on in the review, this soundbar has got a long list of inputs. To begin with it has two HDMI inputs and two digital audio inputs – one coaxial and the other optical. Apart from that, there is also an analog minijack input. Most of the audio bars offer just one audio input and expect the user to use the TV as a switcher, however with the Vizio VHT215 the user can rely on the sound bar if the TV runs out of inputs. If you own a TV that supports Audio Return Channel (ARC) then you would be delighted to note that this audiobar also support ARC meaning you can simplify the cables down to one HDMI cable.

Vizio VHT215 offers SRS StudioSound HDTM technology which Vizio claims is capable of delivering immersive surround sound, deep bass as well as clear dialog and level volume. What this technology essentially does is that it takes the sound from two speakers and creates a surround experience. This soundbar also comes with Vizio’s TruVolume which is there to rid off those volume spikes that happens every time the commercials come on.

Setting up the Vizio VHT215 Home Theater Soundbar with Wireless Subwoofer
Once the soundbar and the subwoofer have been positioned and plugged in, setting up the Vizio VHT215 isn’t going to be tough. Once the sources have been hooked up properly there’s nothing much else left to do since the subwoofer connects automatically to the soundbar. Various adjustments can be made to the sound quality just by clicking a few buttons on the remote. Some of the things that can be adjusted are bass, treble that have a +/- 10 dB range of adjustment. Another thing that the user can control is the subwoofer’s volume.

Sound Quality
Testing the Vizio VHT215 soundbar started off with the Anonymous movie. A test which the sound bar passed with flying colors as it was able to create the small theater and stone-walled rooms setting. The Baroque background music also sounded natural and the dialogue articulation was also top notch throughout the movie. Watching a war movie with high volume levels is probably something that cannot be done with the Vizio VHT215 as it sounded like it was being overworked and the volume had to be brought down before it felt normal again. Thanks to Vizio’s TruVolume technology, the volume spikes were kept to a minimum although using this technology brought about some muffling of details.

The Vizio VHT215 soundbar came with two different technologies namely SRS Wow and SRS TruSurround to give a surround sound experience. Although the first of the two performed poorly, the SRS TruSurround did a solid job in making the soundstage wider. Nevertheless, this soundbar pales in comparison to the Haier SBEW40-SLIM sound bar in the surround sound category as the latter had much richer and powerful sound. When compared to Yamaha’s YAS-101 audio bar, Vizio VHT215 did produce louder sounds and thanks to the subwoofer there was more bass as well. Although Yamaha’s YAS-101 produced clearer sounds a larger soundstage, without a subwoofer something was clearly missing. Also, Vizio VHT215’s power and flexible tone controls made it the better choice.

Pros and Cons
The Vizio VHT215 soundbar is certainly one of the best designed audio bars out there. Vizio has also taken the time to give a good design for the subwoofer. The remote control was simple but took care of all the needs. Providing many connectivity options was also a plus point for this soundbar. Sound quality was also great considering this being a budget offering. The user also has the option of meddling around with a lot of audio options.

There were some issues with high volume levels and the soundbar also doesn’t sound as clear as some of its counterparts.

img src=”https://www.soundbars.com/images/Vizio-VHT215-Home-Theater-Soundbar_5.jpg” alt=”Vizio-VHT215-Home-Theater-Soundbar_5″ width=”450″ height=”66″ />Conclusion
Vizio has kept true to its budget offerings and the Vizio VHT215 soundbar is another one of them. Even on a budget, it has somehow managed to make a soundbar that not only looks great to the eye but also performs decently. This could be the value for money soundbar that you were out looking for.