The Sony HT-G700 is a 3.1 channel soundbar with a dedicated subwoofer. Released in 2020, it supports all the common audio formats and throws Dolby Atmos into the mix for all you movie lovers, although it has to downmix it into stereo as it doesn’t have surround channels.

In this review, we test and find out how this soundbar performs. Is it worth your $498 of hard-earned cash? How does it stack up against similarly priced devices? 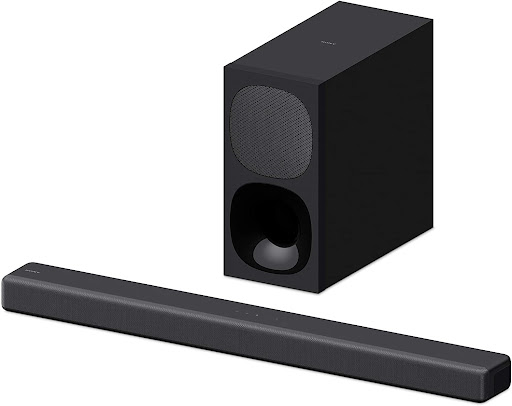 The Sony HT-G700 soundbar has a sleek design. The front has a nice metal grill that looks sleek and protects the speakers. The top, sides and back are made from good quality plastic giving it a great overall look.

It spans 38.5 inches (97.8 cm) which is fairly wide and won’t fit between the legs of most TVs. It will still work well if wall mounted though.

The subwoofer is made of plastic, melamine and a metal grille that covers the bass speaker. A glossy finish surrounds the bass port at the front of the speaker giving it a nice contrast and a plastic plate covers the back.

The back of the soundbar has two openings for power and for the input ports. It also has holes on either side for attaching wall mounts. The wall mounts, however, are sold separately.

The back of the subwoofer is plain plastic with the power cable attached to it.

On the front of the bar, there’s a small display screen behind the metal grille. It displays the input source, changes to the settings and the audio format currently in use.

Atop the bar is an array of five buttons. Power on/off, input selection, Bluetooth, volume up and volume down.

The Sony HT-G700 comes with a nice slim remote that can be used to control all the bar’s settings. However, It can’t be used as a universal remote.

It also supports HDMI CEC and so you can use your TV’s remote to control some of its features like input selection and volume adjustment.

There is no app available to control this soundbar via your smartphone which is a bummer. There is no Amazon Alexa, Apple Siri or Google assistant support either.

The Sony HT-G700 supports many modern physical input connections such as HDMI ARC, Full HDMI In, HDMI Out, and Optical audio In. The HDMI options available allow it to be used as a hub between devices.

Nonetheless, we found the lack of a 3.5mm auxiliary port and USB playback a tad disappointing.

On the wireless end of things, this soundbar only supports Bluetooth playback which is also a disappointment. No WiFi, Chromecast support, Apple airplay or Amazon Alexa. Fortunately, it connects to the subwoofer wirelessly.

The Sony HT-G700 soundbar has a 3.1 Channel configuration with a dedicated subwoofer. It doesn’t come with satellite speakers but that is to be expected at this price point.

It has a fair frequency response all around with the bass slightly subpar on its ‘standard’ mode. It, however, gets a lot better in other EQ modes. The overall sound as a whole could be a lot better.

As this is a 3.1 channel soundbar, the dedicated centre channel does a good job reproducing dialogue in movies. It is clear and accurate.

The soundbar can get plenty loud which makes it ideal for large rooms. If your living room is large, this device is worth a punt. Beware of the bass thump at loud volumes though. Some hate it and others love it.

The Sony HT-G700’s soundstage isn’t as good as you get in some of the competition. The sound isn’t very wide (only as wide as the bar itself) and the sounds are perceived to come from general areas rather than pinpoint locations.

The surround performance is therefore greatly impaired. The downmixing of all the content into stereo doesn’t produce a clear and accurate representation of the surround objects in the audio. This results in an experience that isn’t very immersive.

The soundbar has fewer sound enhancement features than we’d expect from a Sony device in this price range. The lack of room correction means the room will affect its sound. It has seven EQ presets to sculpt the sound but no knobs to adjust the bass and treble independently. We also found that the virtual surround feature called S Force Pro, DTS Virtual X and the Vertical Surround Engine are always on which can be annoying in some situations.

It however has some good features. Dialogue enhancement, auto volume/night mode and subwoofer level adjustment.

The Sony HT-G700 isn’t a bad offering even though we feel it could’ve had a lot more features. How does it compare against the competition?

With a 3.1.2 configuration, the Vizio SB36312-G6 offers great features, some of which are absent on Sony, such as WiFi support, built-in Chromecast, Ethernet, and USB playback.

The Klipsch Cinema 700 offers a similar 3.1 channel configuration to the Sony. It offers some additional features like a graphic EQ, WiFi and Chromecast support. Most of the other inputs are similar but the Klipsch doesn’t support DTS and DTS:X.

It does however have a better soundstage than the Sony HT-G700. The surround content is accurate.

The Sony HT-G700 has a lot of competition in its price range. It sounds good, has good bass from the subwoofer and has many physical input options.

On the downside the soundstage could be better, the lack of an adjustable EQ is a bummer and it could use more wireless connectivity options.