Coming in at just under $250, this simple 2.1 channel soundbar released in 2019 ships with all the features we’ve come to expect from soundbars at this price point.

A wireless subwoofer and Sony’s S-Force Pro Front Surround technology, which is advertised to replicate an immersive surround sound experience without the need for dedicated rear speakers. It does get pretty loud.

But does it really live up to its sound billing? Let’s find out in this review.

The Sony HT-S350 has a metal grille that covers the front face and most of the sides and a faux leather texture on top. The rest of the bar is made of solid plastic.

The subwoofer has a port in the front which is made of plastic and a metal grille that protects the speaker above it. The sides and the top are made mainly of wood.

With a span of 35.5 inches, this soundbar will fit TVs that are 43 inches or more. Additionally, because it isn’t tall, it can thus fit under TVs that aren’t mounted to the wall. This, though, will depend on the width of the legs.

The subwoofer is about the size of an average desktop PC, and due to its wireless connectivity, it can easily be placed anywhere provided that there is a power outlet available.

The bar’s ports are located in the middle at the back, making it easy to run wires without having to worry about getting in the way of anything. The lack of many connectivity options also means cable management will be a breeze. Aside from an HDMI CEC, optical audio input and the power adapter, there are no other things to plug in.

This soundbar lacks a display. Instead, there are three LEDs at the front that flash when you change the settings.

Atop the bar sits five touch-sensitive buttons that control the basic functions. You can power the bar, select TV mode, change the volume, or pair with a Bluetooth device.

A remote control also comes with the soundbar. It is slim in design and controls all the bar’s functions. Preset modes and can control the volume of the subwoofer independently are also available. 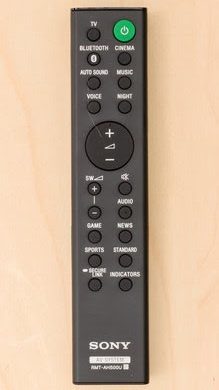 The TV remote can also be used to control the bar thanks to HDMI CEC support.

While the remote controls are convenient, unfortunately, it lacks control features found in many modern soundbars like an app, Amazon Alexa, Apple Siri and Google Assistant.

The Sony HT-S350 has a very basic selection of connectivity options. One wireless option and two physical ones is hardly great but they do the job at this price point.

The only wireless connectivity option is Bluetooth. It will connect to your TV, laptop, smartphone or tablet. It lacks wifi support which negates any possibility of streaming directly from popular apps like Spotify.

On the physical front, you get two connectivity options. Optical in and HDMI Arc. The soundbar ships with an optical cable in the box which is a nice touch but no HDMI cable.

It also lacks full HDMI In so it can’t act as a hub between different devices. The USB port also can’t be used for music playback. It does not come with a 3.5mm AUX port and RCA inputs so some older devices might not be supported.

Regarding audio standards, the soundbar supports Dolby Digital and Dolby Dual Mono, but not DTS or Dolby Atmos that’s available in higher-end soundbars. Dolby digital is only supported via HDMI Arc though.

The subwoofer connects to the soundbar wirelessly

The Sony HT-S350 soundbar has a 2.1 Channel configuration with a dedicated subwoofer. It, therefore, lacks a centre channel and uses the left and right speakers to create a sound in the centre that sounds less clear compared to a dedicated centre speaker.

The dedicated subwoofer brings about an overwhelming shift of balance towards the low end but there’s also a reasonably sharp high end most of the time. This is probably due to the “magic” that pushes up the high mids to enhance dialogue audio content.

This soundbar has various sound modes which enhance certain frequencies to improve the experience of specific content. A voice mode enhances dialogue by amplifying the mids to make people sound livelier. Sadly, it also increases sibilance to the point where anything with a higher pitch has a slight shrill or screech. Our advice is to only use this mode when watching or listening to heavy content dialogue, like talk shows or podcasts.

Besides this, cinema mode is the most consistent, and Game mode is good for both gaming and sports. But regardless of mode, the booming bass, especially at higher volumes, simply overpowers the mids and highs.

There was a lack of punch to the overall sound when listening at lower volumes. The bass is overwhelming and the sound is slightly distorted. This soundbar’s saving grace is that some level of immersion can be felt while listening.

Unfortunately, there aren’t any bass or treble adjustments. It also lacks room correction, so it may sound different depending on the room you’re listening in.

A plethora of soundbars exists in the sub $300 category. Most manufacturers make devices for this segment. How does this Sony stack up against the competition?

Coming in at $300, this offering from Yamaha is great value, packing in solid sound quality for the price. DTS Virtual:X is a nice addition at this price point.

With a similar 2.1 channel configuration, the LG SL4Y offers Adaptive Sound Control that automatically selects the best sound mode to optimise your viewing experience. This is an advantage it has over the Sony HT350. Most of the other features are similar except that the Sony has HDMI Arc.

The Sony HT-S350 has all the appeal of other 2.1 soundbars with subwoofers. It is light, easy to set up, has bass for days, and the features are simple. We would’ve loved to see more connectivity options or just better sound at this price.

Get the Sony HT-S350 from Bestbuy.com today