By now I’m sure everyone is aware what soundbars are or probably even own a set. Typical sound bars usually came with one long sound bar unit together with a wi-fi subwoofer. However, LG HLX 56S 3D Blu-ray soundbar looks to change the way people look at surround bars by providing a lot more than just plain audio enhancements. The LG HLX 56S 3D Blu-ray soundbar actually comes to the foray as a complete home cinema system. Not only does it give you some loud sounds it also comes with a built in Blu-ray player – which plays 3D Blu-ray content – , net portal, digital amplifier as well as Smart TV and an iPod dock. If that got you excited about the soundbar’s potential, read on to find out how it fared.

If you take a look at this baby in pictures, you would think it is one slim product to have come from LG’s stables. However, you would realize how wrong you were when you see the unit in flesh as it does go quite deep at 20.7cm. It also goes 100cm wide and sports a height of 9.5cm just so you get the picture. Now that we have the dimensions covered, how did we find the LG HLX 56S 3D Blu-ray soundbar’s exterior design? It was simply astounding. The unit has a luxurious looking silver finish making it look very futuristic. You will also find the four driver cones to have a similar design but in the middle of each pair you will see a darker looking tweeter. On the front you see a curved platform jutting out; this is where your Blu-ray CDs will go. On the front is also a USB port which is hidden underneath a flap.

To add more class to the already stylish soundbar unit, LG has fitted a glossy black section on the top. This black section doesn’t stop at just making the soundbar look better but it also serves as the spot where all the touch-sensitive controls are located. These buttons give out a nice chime when pressed. We loved everything about the sound bar’s design except for the fact that it doesn’t give you the option of wall mounting. Of course, just like every other surround bar these days, the LG HLX 56S 3D Blu-ray player also comes with a wireless subwoofer. The subwoofer is a big black box in itself. However, it is one stylish black box with a solid build.

The LG HLX 56S 3D Blu-ray surrounbar has an obvious feature, its 3D Blu-ray playback capability. This is definitely a great thing to have on a soundbar as it gives you more than just audio. However, believe it or not, that’s is not the feature that took the plaudits as it comes with Wi-fi onboard together with LG’s Smart TV. Smart TV takes over from NetCast which only offered a few sites like Picasa and Youtube. Now with LG’s Smart TV you get much more like Acetrax for your movie needs, MLB, BBC iPlayer and also Facebook and Twitter. You will find these features in the ‘Premium’ menu while if you go to ‘LG Apps’ you will find an array of apps to keep you busy. They are quite fun actually like the color blindness test, fitness trainer app and the horoscopes app among others.

There is even more good news on the way as this soundbar is DLNA certified meaning you can stream all the stuff you want from your computer straight to the unit. It supports a variety of formats, so there shouldn’t be many problems on that front. You can also play these formats from your USB Flash Drive or from your external hard disks. Now we move on to the connectivity options found on the back of the LG HLX 56S 3D Blu-ray surround bar. The unit provides two HDMI inputs meaning you get to listen to external sources on this soundbar. This would be useful especially to those tech geeks out there who could now get better audio for his games. Of course you also get a HDMI v1.4 output which tackles all the 3D pictures output. Another cool feature would be the Audio Return Channel which makes it possible to listen to your TV without having to get another separate cable. As mentioned earlier you also get to connect your iPod through the iPod cradle which comes out of the box. Other than that, you also find a 3.5mm minijack input as well as a FM radio antenna port. 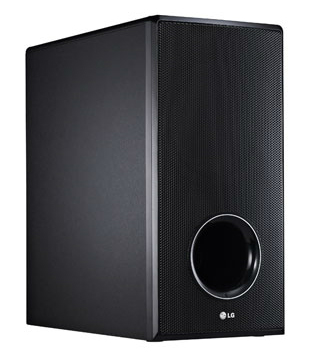 Setting up the LG LSB316 soundbar with wireless subwoofer

The depth of the sounbar rules it out from being wall mounted, so you would have to find another spot for it. However, once you get that sorted out, things are pretty easy with this surroundbar. You can just use sit back on the couch and use the remote control which is very user-friendly that has big buttons made of rubber. They are also clearly labeled and glow in the dark as well, so you wouldn’t have to look for them in the dark. With that remote you can just sift through the menus that have been given a new look. With this new layout, you will be able to breeze through the various settings this surround bar has to offer as it is very easy and straightforward.

Although CDs take a while to load, but the results you get after that wait is simply impressive for a soundbar. The LG HLX 56S 3D Blu-ray soundbar gives a very sharp and dynamic sound thanks to its four drivers that work well in sync and with great speed too. You will also be able to appreciate high-frequencies and fine sonic detail as this surroundbar is capable of rendering them. The subwoofer also gives great bass that can shake the whole living room. However there were some downers too like the lack of midrange solidity as well as too much emphasis on treble at times. Video quality was also top notch. We had no complains with both 2D and 3D images as they turned out great as they had rich colors and had a decent amount of detail as well.

The LG HLX 56S 3D Blu-ray soundbar will win over many with its super stylish design. It also offers various features that work well too.

Audio sometimes concentrated too much on treble. The design was good but its shape prevents it from being wall mounted.

If you don’t like having too much stuff under your TV to do all the things you want, then the LG HLX 56S 3D Blu-ray soundbar can be your best friend as it’s a one stop shop. With the long list of features and good audio and video quality, this surroundbar is worth getting if you have the cash for it.