Every soundbar review starts with us complaining about TV manufacturers sacrificing speakers to win the slimmest TV battle (as if people care!). But that has a bright side, too – it has allowed soundbars to prosper. What started as a niche market is a full-blown accessory today.

Even though there are soundbars that cost thousands of dollars, not every household can afford one. With 4K TVs becoming so affordable, most people are happy to spend some hundred dollars for supercharging their audio experience.

For everyone agreeing to it, the Sony HT-S350 seems a worthy option on paper. But given the price tag of just below $300, is it worth the splurge? Let us find out.

Not many Sony products are known for sporting an extravagant look. The Sony HT-S350 bar falls in the same line. It is an out and out minimalistic product. The main bar comes in black and has a metal grille covering the sides and the front. The underlying material is excellent quality plastic. 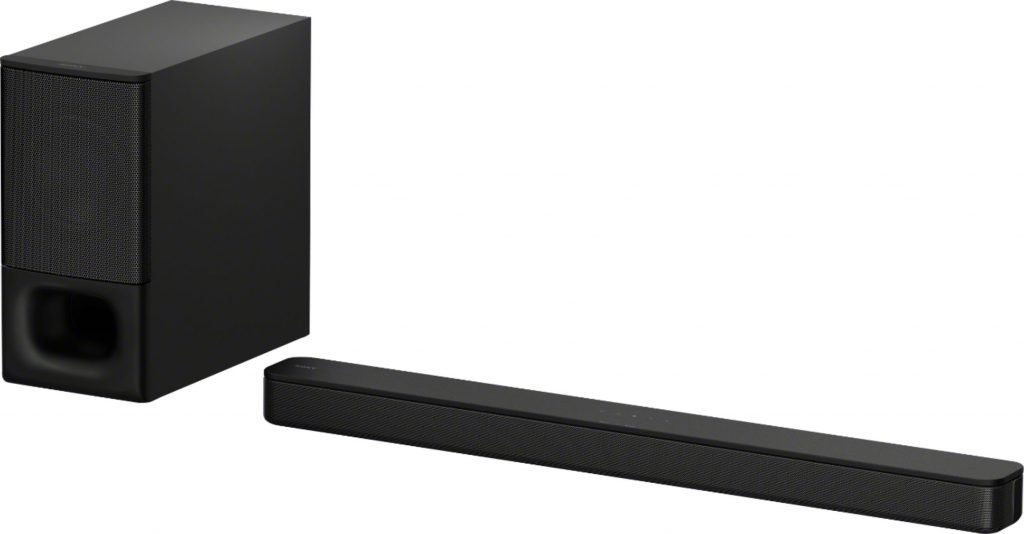 The subwoofer looks like a small CPU with a port in the front and a metal grille protecting it. The port is plastic, whereas the sides are of wood.

The bar stretches 35.5 x 2.6 x 3.5-inches and weighs a commendable 2.4 kg. It is wider than most bars that we have come across and will have trouble fitting below a 55-inch display. It is not very tall, and you can accommodate it easily beneath a wall-mounted TV.

The subwoofer stretches 7.5 x 15.1 x 15.4-inches and weighs a hefty 7.8 kg. It pairs wirelessly to the bar. So placing it on any of the corners should not be a problem provided there is a power source nearby.

The Sony HT-S350 follows minimalism in the controls department, too. It skips out on a display and instead has three white lights on the front—these flash when you tweak any of the soundbar’s settings. 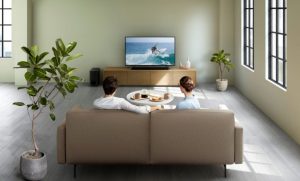 As for controls, the top of the bar has some touch-sensitive buttons. There is Power On/Off, Select TV Mode, Bluetooth, Volume Up, and Volume Down controls.

The Sony HT-S350 soundbar comes with a remote control that enables you to control all its functions. You also have the option to manage the subwoofer’s volume and change preset modes. There is no application support with the Sony HT-S350.

Even though the bundled remote is not a universal one, the Sony bar has support for HDMI CEC, enabling the users to use other remotes to manage its basic settings. It also has a Power Savings that lets it enter standby after a few minutes of inactivity.

The bar is bland with regard to connectivity. You have an Optical Audio In and an HDMI ARC onboard. The former lets you connect traditional devices with the bar, whereas you can connect your TV with the latter. The subwoofer enables you to connect to the bar wirelessly and has a slot for powering it up.

As for wireless connectivity, there is not much to write home here. You get support for Bluetooth, allowing you to connect your PDA devices to the bar. There is no Wi-Fi or Chromecast, and even Apple AirPlay is missing for iOS users.

Let’s discuss the audio codec support (or the lack of it) on the Sony HT-S350 soundbar. The Sony bar only supports Dolby Digital, but the hardware constraints mean everything is downmixed. It also means that you can play most digital content in a hassle-free manner. The lack of an HDMI In leads to it missing out on 4K support too.

Overall, there is nothing much to talk about in the connectivity department. The setup is pretty barebones, and we would have loved to see users getting more options, both in terms of ports and audio codec support.

The Sony HT-S350 is a 2.1Ch configuration with a maximum of 320W audio output. The hardware limitation means that it can’t reproduce stereo content without downmixing them.

The bar’s overall performance is sub-par. Its audio reproduction is on the darker side right out of the box, and the balance is also all over the place. The bar’s stereo frequency is also average, and you will find sub-bass and details lacking in the treble. Turning off the Surround Sound helped improve the balance.

The 2.1Ch configuration means the soundbar doesn’t come with a dedicated center channel. It utilizes the side channels to emulate a center channel. The sound ends up feeling diffused, but the presence of dialogue enhancement means that you do not lose out much while listening to podcasts and other dialogue-heavy content.

The bar’s soundstage is good for its price, and the Surround Sound magic makes it feel wider than the bar itself. Focus is another area where it shines. Irrespective of the ambiance, we were able to pinpoint the source of the sound accurately.

The 320W amp is not merely for the specification sheet but does its job well in real-life too. The Sony HT-S350 has excellent loudness making it a perfect accessory for large rooms or crowded environments. But if you push the volume levels above 80%, it starts creaking (especially in the bass department).

The hardware constraint means we went in with limited surround sound performance hopes and weren’t disappointed. Even though the HT-S350 packs in the proprietary Surround Sound chops, the overall dark profile combined with a lack of dedicated speakers means you will have to be content with what you get.

Speaking of sound enhancements, it has an acceptable array of them. You get Dialogue Enhancement with Voice Mode for more precise audio, Subwoofer Level Adjustment for controlling the bass, Night Mode, and Virtual Surround. Sony also packs in the usual S-Force and a host of sound modes for different content types.

Overall, the bar is a viable upgrade over regular TV speakers. It gets loud enough and has a lot of bass. But when we delve deeper, we unearth some potential weaknesses that mar the overall experience. Given the competition, we expected the Sony HT-S350 to perform better.

Sony’s products get us excited. Most of what we have tried from the brand until now had us impressed. The Sony HT-S350 is a different story altogether. The audio right out of the box is too bass-heavy and muddy for our liking. Turning off the Surround Sound improved the clarity, but the output was far from likable.

Given the usual hardware and pricing, there is a decent competition that offers performance several notches higher. Here is how the competition stacks up again the Sony HT-S350 –

The Polk Audio SIGNA S2 is a 2.1Ch configuration soundbar from Polk Audio that handsomely beats the Sony bar in the performance department. Its sound output has better balance and texture and doesn’t sound as pointless as the HT-S350.

The Sony soundbar has a better build and gains some point in this department. It suffers from lesser compression at max volume levels than the Polk Audio bar. There are more sound enhancement features present, making it a more rounded offering.  Buy Polk Audio SIGNA S2 from Bestbuy.com now.

The Yamaha YAS-207BL is downright impressive for what it packs at its price point. Its sound output is neutral-ish and has much more texture. It also caters better to different content types. Plus, it has a Full HDMI In port, too, with support for DTS and 4K playback.

The Sony bar hits back by offering more sound enhancement features and higher loudness. It also is arguably a better build of the two. It has a broader soundstage thanks to Surround Sound and offers a better movie-watching experience.

We expected a better bang-for-bucks product from Sony

Sony had simplicity in mind while creating the HT-S350. While it’s understandable from the company’s perspective, the competition has moved far ahead. Products like Yamaha YAS-207BL are the new benchmark.

Even though the Sony HT-S350 is a nice upgrade over your regular TV speakers, it has many caveats hidden under its solid plastic body.

So, where does it fall? It is not a bad product by any means, but it doesn’t do much to topple the competition. Unless you get a good discount or if you are a Sony fanboy, we would suggest you steer clear of the Sony HT-S350. The competition has much more on offer for a similar price tag.