LG’s SN10YG is a follow to of its well-crafted SN9YG from 2019. Even though the configuration says 5.1.2Ch, you won’t find the rear speakers in the package. Instead, you will find two additional speakers built into the main bar to emulate a complete surround sound impact.

If we look into the spec sheet, it seems like another well-rounded option with a great selection of input ports, wireless connectivity, and audio codecs. It is rated for 570-Watts of output, which means you can expect it to get reasonably loud in favorable conditions. Also present is a wide range of sound enhancement features to let you tweak the sound to suit your taste.

But are all of them enough to justify a higher-midrange tag of USD 900? Let us find out.

This is the LG SN10YG review.

In terms of build, LG has opted not to tweak what’s not broken. Most of the SN10YG looks similar to its predecessor. The main bar is made of excellent quality black plastic with two round metal grilles on the top to protect the speakers. You will also find a grille cover on the front and side of the speakers. 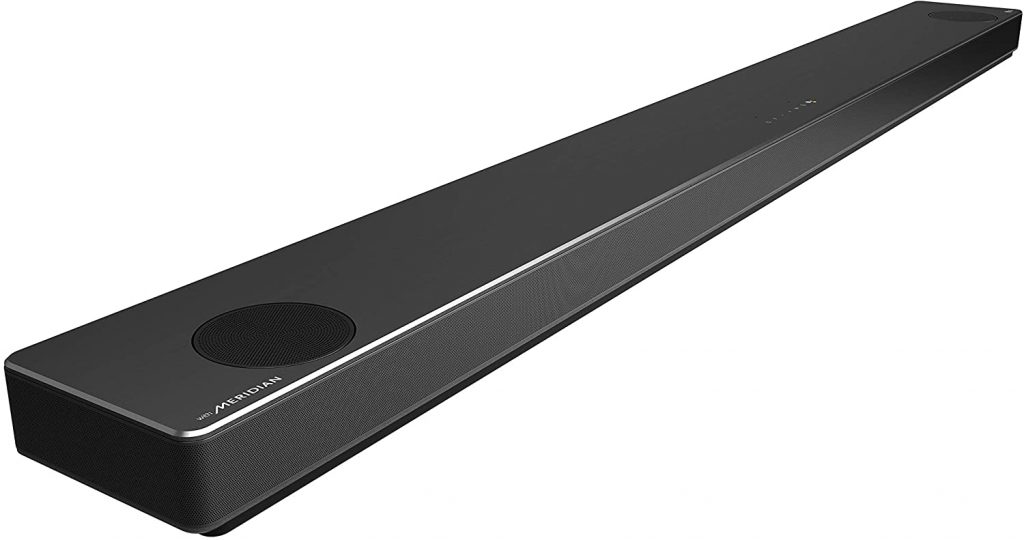 The bar spreads 56.8 x 2.5 x 5.8 inches and weighs 7.20 kg, making it exceptionally long and somewhat bulky. You will have some trouble trying to fit it below a 55-inch without making it feel obtrusive. Talking of its height, it is a no issue and doesn’t intrude on your TV screen’s lower side unless it sits flush to the floor/table.

The subwoofer is like most others we have seen in the market. It is of a PC speaker’s size and is made of hard black plastic, with fabric covering it from three sides. The outer shell feels solid and houses the ports on the back. It spreads 8.7 x 15.4 x 12.3 inches and weighs a rather bulky 7.80 kg. It connects wirelessly to the main bar, and you will have to pair it with a power source for it to function.

You will find a 5-character display towards the right of the bar. Also present are touch-sensitive buttons on the top of the bar. Overall, we have little to complain about with the design and build of the LG SN10YG other than it is painstakingly long.

The LG SN10YG has a mono 5-character interface. It displays the current choice of input and volume levels. Also present are four indicators below it that light up every time you change specific settings.

On top of the bar, you will find an array of touch-sensitive buttons. The lineup includes Power On/Off, Select Input, Volume Up/Down, Play/Pause, and a dedicated Google Assistant toggle. Also, part of the package is remote. Its overall footprint is relatively small and uncluttered. The remote can control all the bar’s functions, and the buttons feel tactile, but it is not a universal one.

As we have come to expect, with most soundbars over USD 700, the LG SN10YG supports toggling through a companion app called “LG Wi-Fi Speaker.” The app houses the essential functions and misses out on the bass and treble adjustment options. It is available both on Google’s Play Store and iOS’ App Store.

Power efficiency is one area where all the soundbar brands are putting impetus, and LG is no different. It comes with Power Saving Mode, which puts the bar on standby after fifteen minutes of inactivity. The presence of HDMI ARC support means you can also use your TV or other universal remote to manage its essential functions with ease.

The LG SN10YG houses a full array of input options, both physical and wireless ones. The input ports are located on the back of the device. You get 2 HDMI In, an HDMI Out, an Optical In, and a USB. It means the bar can act as a hub between your TV and other devices. It lacks the traditional 3.5mm jack, which can disappoint the purists (like me), but compensates by including a USB port to add to your thumb drive.

Talking of wireless connectivity, you get above-average options here too. The LG SN10YG soundbar comes with Bluetooth and Wi-Fi support. It also has Chromecast built-in to let you stream your favorite albums or podcasts seamlessly. The only missing onboard is the Apple AirPlay.

Speaking of audio codecs, we get excellent support from the LG soundbar. It supports Dolby Atmos and has eARC, which encompasses all the major formats you are likely to play. The latter’s presence also means you can emulate surround sound-based codecs more efficiently. It also supports Dolby formats via the physical Optical In port, letting you connect to Netflix and your Blu-Ray disks conveniently.

The soundbar also comes with a 4K Passthrough, including support for 10-bit and HDR10 playback, making it an all-rounder of sorts.

The LG SN10YG is a 5.1.2Ch configuration outputting 570W of power. It is an excellent bar for mixed usage, and LG has opted for a bass-heavy profile. The enhanced impetus makes it a good option for action movies and games. It gets loud enough for most scenarios, and a lot of sound enhancement makes it an enticing option. 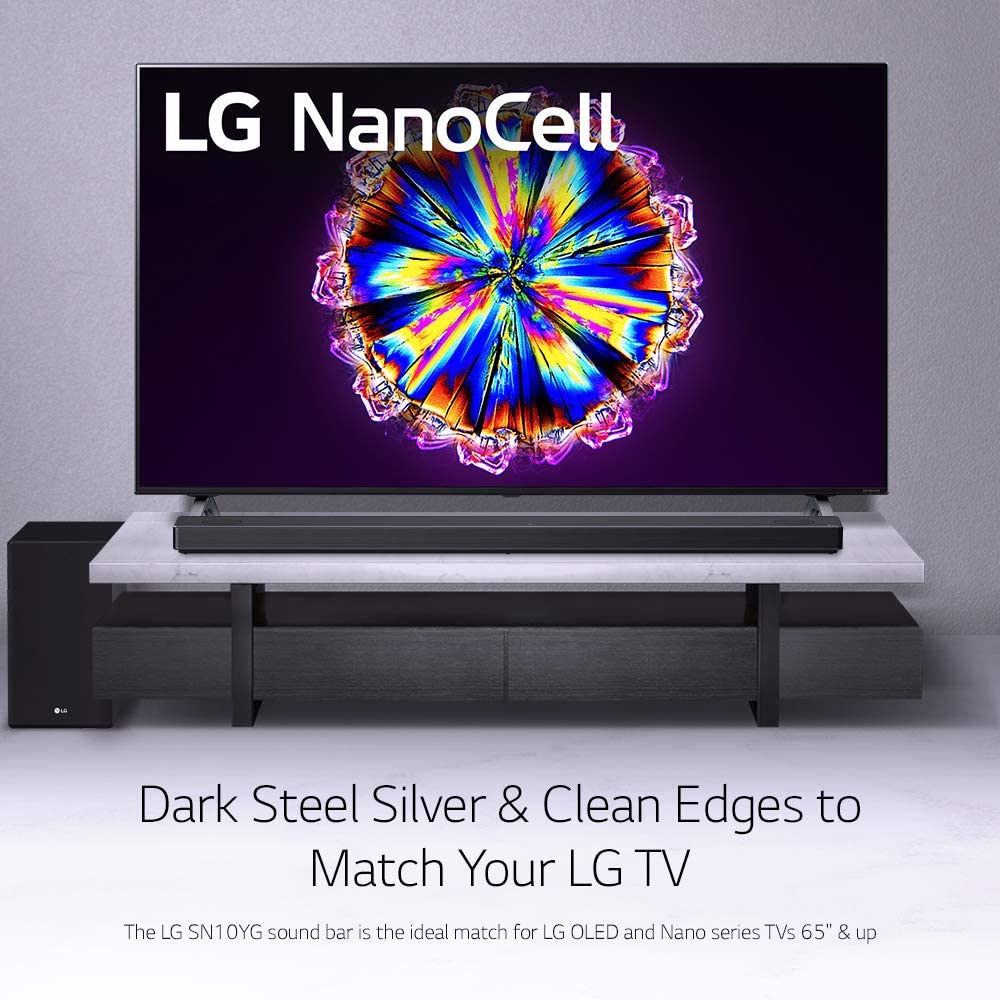 The LG soundbar has a well-extended bass, but the other frequencies are more inclined towards a neutral sound signature. It also has an excellent stereo soundstage, which is a bit wider than the bar itself. Because of the speakers’ versatile setup, the sound doesn’t feel spread out, and it was easier to pinpoint the location accurately.

Even though the configuration is 5.1.2Ch, the surround sound performance of the soundbar is underwhelming. Instead of opting for physical rear speakers, it adds side-firing speakers to the mix, making the sound bounce off the walls in a tryst to imitate real surround sound. The resulting output doesn’t feel as comprehensive and precise as we would have liked.

Thankfully, its height performance is not the same story. It uses its up-firing speakers well, and you get an accurate impression of height, but the end sound is a bit diffused compared to the down-firing speakers.

Discussing sound enhancement features on board, the LG SN10YG shines here too. It has room correction and a plethora of sound adjustments if bass-heavy output if not your cup of tea. Also present are a few EQ presets such as Standard, Movie, Music, AI Sound Pro, and the Bass Blast. It has dialogue enhancement too, which makes the bar an excellent choice for dialogue-based content.

Overall, the LG SN10YG soundbar’s performance impressed us all around. Its surround sound could have been better, but it is the same story as most of its competition. The loudness and the intensity of the output make it likable and compatible with most scenarios.

The LG SN10YG is an uncomplicated soundbar that does most of the things well. But the price tag it carries automatically brings a myriad of capable competition alongside it. Let’s see how it stacks up against them –

The JBL Bar 9.1 has a neutral sound profile right out-of-the-box, which garners a lot of praise from the purists. It also has satellite speakers in its package, giving it an edge in the surround sound department over the LG SN10YG.

The LG bar hits right back with a better build and more sound enhancement features. It also comes with two HDMI ports, which we haven’t seen in most other soundbars.

Both the SL10YG and SN10YG belong to the same coterie, with very few differences to tell them apart. But the latter offers significantly better surround sound and height performance. The SL10YG hits back with louder output and better output control, making it an equally apt choice.

The LG SN10YG is decent for dialogue and TV shows. Although it follows a bass-heavy profile, its mid and treble range is a treat. The presence of a center channel and dialogue enhancement ensures precise reproduction.

Atmos’ support makes it a versatile offering, and the side-firing speakers give it an edge over the competition. Even though we would have liked a better surround sound performance, the overall performance makes it an easy recommendation in the price range.

Here is the LG SN10YG Bestbuy product page link for you to explore.