The LG GX Soundbar is in flagship territory, built to partner its Gallery series of premium OLED TVs, but is also available as a standalone product. It packs in a 3.1Ch configuration and costs $1,000 to boot. The territory is full of offerings that include a combination of upward-firing, satellite, and sophisticated software to stand out. LG is taking the classical route and is focusing on packing quality in a small package.

The main issue with 3.1Ch is the downmixing going on for most high-quality codecs. But it packs in an OLED screen, a powerful subwoofer, and several audio enhancement features to compensate for the same. Has LG done enough for us to overlook the flaws and recommend it to our readers? Let us find out.

This is the LG GX Soundbar review.

The LG GX Soundbar looks different from every other soundbar in the market. Instead of following a boxy design, it follows a sleek form factor made of black plastic and smeared in tight fabric wrap. It tries to replicate the look of the Gallery line of LG TVs in a smaller form factor.

The LG GX Soundbar stretches 56.7 x 5.9 x 1.2-inches and weighs 4.65 kg. It is very tall and wide and won’t fit below a 55-inch TV. Also, it stands at an angle, and you may have issues in placing it comfortably below a TV. The front houses an OLED display that displays the current input, volume, and other changes that users make.

It incorporates the physical button similar to a smartphone, i.e. on the side. The back of the bar houses two angled divots for positioning the bar. It houses two openings, one for the power cable and other for the input slots. You can also wall-mount the bar, and the accessories for it come in the package.

The LG GX Soundbar also has a wireless subwoofer made of a combination of melamine and plastic. Similar to the bar, a thin fabric covers it and is prone to collecting more dust than you would like. The subwoofer stretches 8.7 x 15.4 x 12.3-inches and weighs 6.40 kg. It is the size of a desktop PC and can fit beside your TV easily. The back of the button houses a detachable power cord and a pairing button to connect it to the subwoofer.

Overall, we give full marks to LG for making GX Soundbar stand out from the competition and feel classy at the same time. More often than not, we found our team members gauging at it subconsciously, and that speaks volumes for the product’s build.

The LG GX Soundbar follows the side buttons philosophy and houses four of them on its right. You will find the Power Button, Switch inputs, and Volume Up/Down options and they offered tactile feedback.

The bar also comes with a basic remote, giving users access to all the settings. The build is plastic with a matte-like finish, and the buttons feel rubbery. It is not universal, which means you won’t be able to use it to toggle your TV or other device’s settings.

It also comes with support for a companion app called LG Music Flow Bluetooth. For some odd reason, it is available only on the Google Play Store and not on iOS. Users can manage the dialogue enhancement feature and create audio playlists exclusively via it, and you can control everything via the application.

The LG GX Soundbar also has a Power Saving option, and the manufacturer doesn’t specify the exact time. In our usage, we found it to go on standby after 15 minutes or so. It also supports HDMI CEC which lets you use your TV’s remote to manage the basic soundbar settings.

The LG GX Soundbar comes equipped with a wide array of inputs. It has an Optical In, HDMI ARC, HDMI Out, Full HDMI In, and USB for Files slot placed at the back of the bar. The regular 3.5mm jack is missing from the package, and you will have to resort to wireless connectivity to play audio via smartphone and other similar devices. 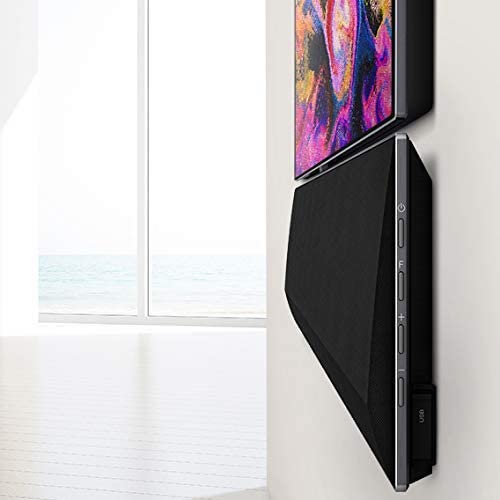 For wireless connectivity, there is not much here for us to talk. It supports Bluetooth, and that’s about it. There is no Wi-FI or support for Chromecast and AirPlay on board, and it had us disappointed.

As for codecs, there are no corners cut here. It supports all the major ones, such as Dolby Digital, DTS Digital Surround, DTS:X, DTS-HD, Dolby Atmos, Dolby Digital Plus, 5.1 PCM, and Dolby TrueHD. The presence of eARC ensures that you can play surround sound content conveniently too.

The LG GX Soundbar also supports 4K Passthrough with ability to act as a hub between your gaming console and TV. It can playback HDR10 content too, and the content looks and feels enthralling. Overall, the support for Atmos, but the lack of enough wireless connectivity options make for a middling experience.

The LG GX Soundbar is a 3.1Ch configuration bar which can be kept on a table or wall-mounted, but the weird form factor can obscure your TV screen. Also present is a wireless subwoofer in the package. The bar sounds bass-heavy out-of-the-box with good texture making it suitable for mixed usage.

The bar has a dedicated center channel which makes it perfect for dialogue-based content. It also comes with a dialogue enhancement feature to further boost vocals. The soundbar comes with a decent stereo frequency response, but struggles in reproducing sub-bass. The overall sound signature is quite likeable and suits most content types amicably.

Costing so much as it does, we expected it to have a better surround sound, but sadly it falters there. The right and left speakers fail in creating an appropriate impact and downmix content to stereo. The soundstage is as wide as the bar but has an above-average stereo dynamics.

The soundbar can also get pretty loud at 420W, but there are considerable thumping and compression artefacts at higher volumes. There are no height or satellite speakers in the package further impacting its ability to create an immersive experience.

As for sound enhancements, there is no room correction, and that is almost unacceptable at this price point. Keeping it aside, we have decent options to tweak the sound as per our taste. There are five EQ presets, out of which ‘AI Sound Pro’ seemed most interesting to us. The company claims that it can optimize the output depending on the type of content, and it worked decently in our limited experience. Also present are bass, treble, auto volume, subwoofer-level, and virtual surround modes for enhancing the output.

Overall, the LG GX Soundbar offers decent performance for the quoted price tag. It sounds good for most conditions, but the lack of proper surround sound goodies is questionable. Also, the omission of room correction, which we have come to see in some cheaper options too, does not serve it right.

The LG GX Soundbar has a lot of competition, most of whom offer more bang for the buck (on paper at least). Let us see where it stands when pitted against them –

In our LG SN8YG, we called it an excellent overall package. We feel it has several advantages over the GX Soundbar. The first being the inclusion of the up-firing speakers and room correction, lacking in the GX Soundbar.

The second being support for Chromecast and Google Assistant, which further gives it an edge. The GX Soundbar claws back with a better sound profile and better loudness. It also scores nifty points by looking modern and classier.

The LG GX Soundbar encompasses a lot more features than the Samsung HT-T650. But the latter feels better built and doesn’t compress as much. The LG bar ramps home with support for Atmos, 4K, and eARC. The surround sound is inadequate on both. LG also ships the GX Soundbar with a companion app support which is missing with the HW-T650.

The LG GX Soundbar is a mix of polarising elements, it does certain things very well, but make weird omissions that make us question its price tag. The build is very different from what we have used to see and caters to the mixed usage well. Even though it supports Atmos, it has to downmix surround sound content because of the limited configuration.

With steep competition around, it’s difficult for us to recommend the LG GX Soundbar for everyone. It does certain things exceptionally well, and if you can live with the aspects where it falters, it can be a good buy for you.

Here is the Bestbuy.com product page link of the LG GX Soundbar for you to know more about it.