As one of the lower cost soundbars in Samsung’s lineup, this all in one speaker does everything you need from a sound system all in one sleek package.

With only one wire, it’s designed to bring beautiful sound quality to wherever you need it thanks to its wifi and Bluetooth connectivity.

With an RRP of $329.99, can this soundbar keep up with other similarly priced ones? Let’s find out in this review.

What’s not so good?

The Samsung S61A soundbar stretches 4.9 x 30.1 x 2.7 inches and weighs a mere 6.6 lbs or 3 kg. It comes in black or grey which offers options for your interior colour scheme.

The unit features a sleek and premium fabric design. Wrapped in a tasteful Kvadrat fabric, there’s a hexagonal mesh at either end that covers the side-firing horn speakers.

All the seven speakers are housed in the soundbar including two woofers and a tweeter built-in, so you can enjoy rich sound anywhere in the house.

Located on top of the soundbar are four buttons. They let you adjust the volume, mute and unmute the voice assistant, and adjust the input and microphone.

The Samsung S61A soundbar is equipped with a series of LED indicators that flash in a colourful sequence (white, cyan, green, blue, red).

For more intuitive control, you can use the remote that comes in the box. This lets you control most of the sound bar’s functions.

For even more control and advanced settings, the Samsung SmartThings app acts as a remote allowing you to control all of the soundbar’s functions.

The app can also be used to connect the soundbar to wifi, as well as offering access to the usual playback controls, EQ settings (including advanced settings), sound modes, Alexa and Spotify set-up and Bluetooth pairing.

It also comes with built-in Alexa support which allows you to control it using your voice.

The Samsung S61A boasts a host of connectivity options.

There are 2 options for physical connections – HDMI ARC and Optical. It however lacks HDMI in to allow it to be a hub between devices. It would’ve been nice to have RCA and Aux-in to allow connection to older devices for audio playback as well.

It also doesn’t have a USB in for files and Ethernet which would’ve been welcome additions.

The wifi connection, though, makes up for the lack of ethernet.

One issue with the wifi connection is that it overrides the HDMI port. Therefore, turning off the TV doesn’t always result in the soundbar turning off.

Another great feature, albeit for Samsung Galaxy phone users only, is the ability to use the Tap sound feature. This sends music straight to the soundbar when you tap your smartphone on any part of the device.

For iOS users, a new and welcome feature is Apple Airplay 2 for sending audio from an iOs device or grouping it with other AirPlay speakers. It is useful if you don’t want to rely on Bluetooth only.

The Samsung HW-S61A is an improvement over its predecessor, the HW-S60A. It has a new centre channel that handles dialogue better. Movies are therefore a joy with this sound bar. 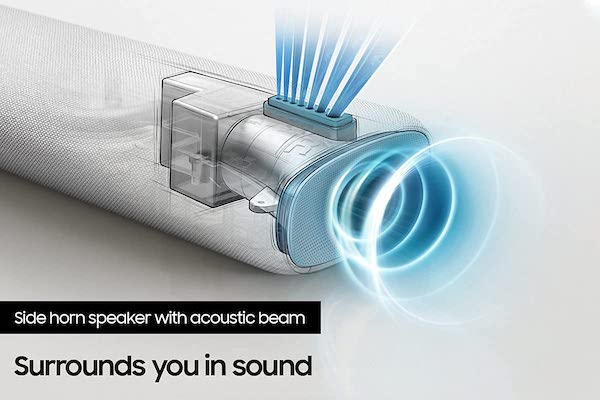 The adaptive sound mode from the previous model has also been improved. It highlights background noises in a nice way. They linger in the air rather than compete for focus.

It also disperses the sound out wider with the horn speakers. Its acoustic beam technology boosts the sound tracks. The performance when watching sports is equally impressive.

One downside of the Adaptive sound mode, however, is that it sounds thinner than the standard mode. Even though the sound is more lush and detailed, it doesn’t quite have the punch that the standard mode possesses.

If you are a bass head or love movies, you will find the lack of punching bass quite disappointing. This soundbar has many great things going for it but bass isn’t one of them.

If you want a fuller sound experience, the HW-S61A can connect to the SWA-W500 wireless subwoofer and the SWA-9100S wireless rear speakers. These would solve most of the issues that plague this soundbar.

Overall, the soundbar offers excellent stage clarity and spaciousness. The side speakers spread sound far beyond the width of the soundbar. In addition, a clear tone appears without harshness or hiss. The music sounds very energetic.

At this price point, the Samsung S61A definitely has a number of rivals from a vast array of manufacturers. Here are some similarly priced soundbars that are worth checking out.

Coming in at a similar price point, the HW-T550 comes with a subwoofer whereas the S61A does not. The advantage that the S61A possesses though is that it is a 5.0 channel whereas the HW-T550 is a 2.1 channel soundbar.

The Samsung S61A though is easier to set up as it is just one bar and the presence of many speakers, airplay2, and Alexa make it a more exciting option especially if you get the sub as well.

Closer to the S61A, is the Samsung HW-T650 due to the presence of a centre speaker. This speaker provides more dialogue clarity making movies more exciting. It also comes with a subwoofer which the S61A does not.

The HW-T650 is more similar to the Samsung S61A than the HW-T550 because of the extra channel. This makes it a more compelling option, especially with the subwoofer. The extra features on the Samsung S61A for example Airplay 2 and Alexa still make it a viable option especially if you get the addon subwoofer.

In a nutshell, the Samsung S61A is really an all-in-one soundbar that fulfils way more than what it is expected to. With visually pleasing aesthetics and premium build quality, it is durable and suits all interior designs.

However, this model lacks important features such as HDMI in, USB for files, ethernet and a subwoofer. It only has an optical input for TV’s that do not support Bluetooth connection.

On the bright side, the focus on wireless connections gives you a clutter-free space around your TV and soundbar. Bluetooth, Wifi and Airplay provide more than enough options to play music from your TV, computer, tablet or smartphone.

Extra features such as Airplay2, Alexa, Tap Sound, etc make this soundbar compatible with many devices and environments. 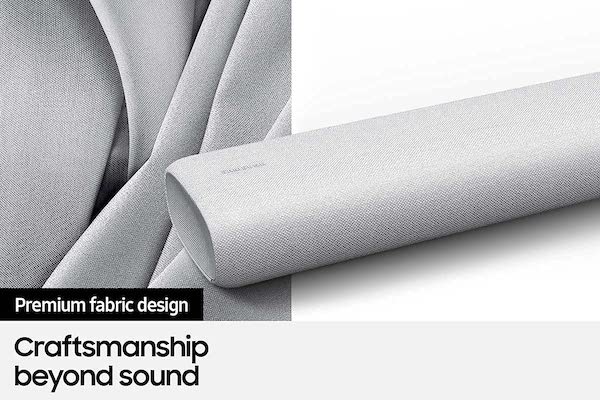