A new Atmos-ready speaker from Bose has been unveiled, and it’s the Smart Soundbar 900. In direct rivalry with the Sonos Arc, it’s Bose’s first soundbar to deliver immersive surround sound.

The Bose Smart 900 is a stand-alone 5.0.2 system with a luxurious look. Two up-firing drivers enable Dolby Atmos material, unlike the Bose Smart 700.

With the ADAPTiQ feature, room correction allows you to fine-tune the audio output based on the acoustics of your room, making it ideal for listening to a wide range of audio content.


Also, with the use of PhaseGuide technology patented by the manufacturer, this soundbar beams sound across your space to produce a spacious and immersive soundstage.

Not convinced to get it yet? Find out more about the product below.

This is the Bose Smart Soundbar 900 review. 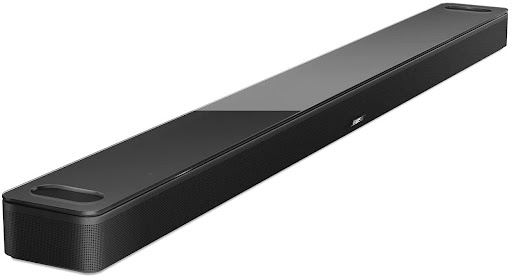 Dolby Atmos compatibility, voice assistants (Amazon Alexa and Google Assistant), and an attractive appearance are all features of this device. A wide variety of music sounds great through it, just like it does with the Arc.

If you’re already a fan of the Bose brand, the Smart 900 is an enjoyable and capable device that packs a powerful punch for your favourite movies and music.

With a glass top and metal grill covering the front and sides, this product is available in black or white.

It also comes with two touch-sensitive buttons, one for activating the voice assistant and the other for muting the microphone, located on the front. If you don’t pay close attention to the upper left, you won’t even see the buttons.

Just below the buttons, you’ll find a small LED indication. Depending on the function you’re utilising, it emits a variety of different colours and patterns of illumination.

Because there are no built-in controls on this device, you’ll want to keep your remote nearby, even if you can control all of its capabilities via the Bose Music app (we’ll get to that later).

All of Bose’s smart speaker features may be accessed through the surface’s smooth glass buttons (microphone mute, action button). Other functionalities, such as mute, play/pause and other volume controls require a remote or the app.

While the Bose 700 has an elegant, backlit Bluetooth universal remote, the Smart 900 comes with a simple infrared remote that isn’t backlit.

The gadget may be operated solely with the provided remote control, but this would deprive you of many useful features.

Other than that, the product also comes along with an X-Men-style headset and a very lengthy cord. While this could theoretically improve your ability to read minds, it is really used by Bose’s audio calibration system, known as ADAPTiQ.

Your typical TV watching area must be used for this tool to accurately calibrate the soundbar’s channels to match the acoustics and form of the space.

Next, for iOS and Android devices, the Bose Music app provides step-by-step instructions on how to connect the product to your home’s Wi-Fi, calibrate the sound, and set up either Google Assistant or Amazon Alexa if you wish to use the 900’s smart speaker capabilities. 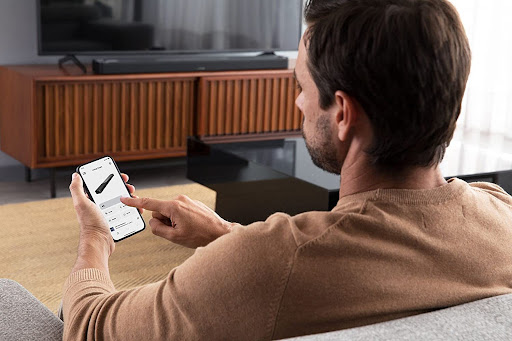 Moreover, you’ll be able to access all of the app’s more advanced settings such as the bass and treble controls, as well as the dialogue enhancement option. The remote has no effect on any of these. Dolby Atmos reception and playback can only be verified using the app.

Unlike the older 700 model, the Smart 900 comes with an eARC HDMI. That means it can automatically handle output from associated sources if your TV also has an eARC HDMI output.

Additionally, the ADAPTiQ microphone (which is utilised for automatic room adjustment) and 3.5mm inputs labelled Bass and IR can be plugged in for wired connections to those devices

Next, wireless sources such as Bluetooth and Apple AirPlay 2 are also supported. It has an Ethernet port, but you may also use the built-in Wi-Fi to connect to your network wirelessly.

However, when it comes to receiving audio from your TV and transmitting control instructions via HDMI, the Bose Smart Soundbar 900 features just one HDMI input.

Having to give up one of your TV’s HDMI ports without a replacement may be a minor nuisance for the majority of consumers.

But, for audiophiles with older televisions, this presents a new issue. It’s impossible to deliver 24-bit, lossless Dolby Atmos in Dolby TrueHD if your TV doesn’t support HDMI eARC (which is most TVs that are older than two years), thus you can’t use the 900’s full potential.

It is possible to connect a Blu-ray player or streaming media device to one of the HDMI inputs of a Dolby Atmos soundbar, bypassing your TV’s constraints on HDMI ARC, and sending the audio straight to the soundbar while the video is sent to the TV.

A product owner revealed that connectivity wise, there were no issues as they tried connecting their BT TV Pro Box to their TV via HDMI 1 (as it’s 4K HDR-capable), then plugged the Bose soundbar into their TV’s HDMI 2 port (which is eARC).

When they switched on the TV, using BT’s universal remote, which handles both set-top box and TV, there was a bit of flickering between the HDMI source while the soundbar activates, then sound is output through the soundbar with ease.

The soundbar owner also stated that there was only one HDMI port on the soundbar, so it can be quite a hassle as they constantly have to figure out which cables to plug in the soundbar and hope that future products of Bose can improve on this.

Despite its impressive sound quality, the Smart 900 does not sound as well as you’d expect for its pricing point. Virtual surround sound and Atmos height effects are well-done, but not quite up to the Sonos Arc’s standards.

More importantly, Atmos’s performance was adequate, but not exceptional. It appeared that rain was falling from the ceiling while watching an Atmos demo video, however, this effect was more vivid when using the Arc.

A lack of low-frequency resolution in the soundbar’s low-end frequencies was an issue when viewing movies, but it was not when listening to music.

It was hard to hear Billie Eilish’s voice on “Therefore I Am” since the bass was so overpowering, yet her voice still sounded full. On “Blinding Lights,” The Weeknd’s bass rumbled, but it also overshadowed the other instruments and vocals in the song.

The gadget is capable of filling a big room with sufficient volume. At maximum volume, it registered over 95 dB, although the sound was a little grating and distorted.

After reading through this article, do you still think the Bose Smart 900 is the best option for you? Let’s try comparing it with some other brands.

The Bose Smart 900 is neck to neck when compared to the Sonos Arc as the 5.0.2Ch arrangement of the Sonos Arc is housed in a single long bar. For an additional fee, you may also purchase a subwoofer and satellite speakers. With no subwoofer, we felt the sound to be too high in the treble, which resulted in lacklustre bass.

Sonos’s frequency response is mediocre due to its lacklustre bass performance. Many find the treble to be very high, and even lowering the room correction didn’t appear to make any difference.


The Sonos Arc has a dedicated centre channel. Dialogue and other vocal-based information are reproduced exceptionally well. Although the overall performance can be affected by piercing treble, it is generally pleasurable.

However, the bar’s ability to handle large volume levels is a disappointment. There’s a lot of compression sneaking in and it’s affecting the overall experience at 75% volume. As a result, the bass section is the one that suffers the most. Given that the side speakers bounce the sound off the wall before reaching you, the surround sound is passable.

Coming up next, the Samsung HW-Q80R is also on par with the Bose Smart 900 as it comes with a 5.1.2-channel immersive audio experience that leaves the audience in awe, Adaptive Sound mode, two HDMI inputs, Harman Kardon tuning, and DTS:X and Dolby Atmos support are all included.

Optical digital input is the alternative digital connection option, although wireless options include Bluetooth and WI-FI.

It’s possible to connect the product to a wireless subwoofer or other speakers via a two-pin power cable, which is connected to the soundbar’s USB port on the bottom.

The Samsung HW-only Q80R’s drawback is that its number of HDMI inputs is disappointing and it lacks a wireless rear speaker. Because of this, it lacks the Q90R’s rear surround and overhead channel, and instead relies on the two upward-, three front-, and two side-firing drivers on the product.

As far as soundbars go, the Bose Smart 900 is up there with the best of them, according to our research. While the glass top is beautiful in daylight, it is also reflective, resulting in distracting reflections when viewed in dim light. That’s one of its flaws.

Nonetheless, it’s a significant step forward from the 700. As a result of the two visible upward-firing speakers, the integration of Dolby Atmos decoding makes for a one-box solution that will improve any television’s output.

Furthermore, the product can be used as a high-quality speaker system for a living room setting if music is fed to it via Airplay, Wi-Fi, or Bluetooth. If you want to use your voice, you can do so as well.

There are competitors who provide even more, and given the overall price, you might find a less attractive soundbar that performs better for a little less money.