Bluesound has experienced its ups and downs throughout the year 2018. The Generation 2i products that were released weren’t competitive enough to grab themselves the title of Product of the Year. However, the Canadian manufacturer did manage to bring back the What Hi-Fi Awards for its other products.

While several of its products are reported to have mixed reviews with this new iteration, Bluesound has successfully maintained its consistency with the Pulse Soundbar 2i, another highly anticipated upgrade from your current settings. It even comes with multi-room streaming capabilities, which are definitely a plus considering its other products. But is it really worth the price of $899.98?

The Pulse Soundbar 2i is not an attractive soundbar, at least not aesthetically. One main feature of soundbars is that they should not draw the viewer’s attention away from the screen, but this soundbar’s size stands out too obvious to ignore. Even if it draws attention away from the screen, the soundbars should look classy and premium with a sleek finish, but the Pulse Soundbar 2i does not have these traits.

At over a metre in length and standing at 14cm tall, this is not a soundbar you’d expect to be lacking power. In fact, the soundbar itself has 2 powerful drivers that help support the audio quality. This, in return, compromises the design for quality because large drivers will take up space, and the bulkiness will block off a proportion of the screens. It shouldn’t be a problem for those who possess TVs with long legs or plan to accommodate them on the TV shelf. The soundbar comes with a wall mounting option to prevent view obstructions, but it weighs a heavy 6.8kg, so owners still have to be careful when mounting it. 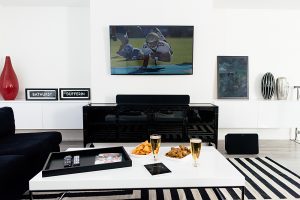 This is where the slope starts, as there are totally no buttons or whatsoever on the soundbar itself. It doesn’t even come with remote control, which should be quite confusing for first-time users. To control it, you have to use Bluesound’s BluOS  Controller app, which can be accessed on your smartphone.

There are various options like setup, source selection, gain control, and so on on the app. The app is also one of the only ways to integrate the Pulse Soundbar 2i into a multi-room Bluesound system or add a couple of Flex 2i wireless speakers to create a surround-sound setup. If you are on the consumers who do not like button pressing or screen tapping, you can always connect the soundbar to an Amazon Echo device and give instructions using voice command.

Although it has no remotes, most IR remotes do work with the device itself, provided you have one lying around at home, and you can pair it up with the app. This is a great alternative, but the app and user manual does not let you know that this is possible. This feature was also stumbled upon, which is why some consumers will never know about this if they go according to the instructions manual.

In terms of physical connections, Bluesound offers ethernet alongside its dual-band WiFi, USB types A and B, Optical, RCA and HDMI inputs and an output for a subwoofer.

The Pulse Soundbar 2i hosts a great advantage over other competitors with its connectivity options. The soundbar supports every audio file format you can think of, which is already a great feature for normal playback. With support for different audio Codecs, it is definitely one of the better competitors for connectivity. You can also connect your device via Bluetooth and WiFi to stream your content from the soundbar itself.

If your home has it, the odds are high that the Soundbar 2i can play it. Thanks to Bluesound’s imposing list of support devices, you have many options if you plan to invest in this system.

The Pulse Soundbar 2i is a great try for those who possess the physical space to house it. Even though it is bulky, the performance that it presents in exchange for a slim look is rich and enhanced, allowing the user to fully immerse in a bold and widely dispersed sound field that’s hard not to like.

The driver array is impressive for the Pulse Soundbar 2i, although it is not really pretty to look at. The audio quality is enhanced through the massive drivers and redeems for the poor user experience it has to give in system UIs and controls. Adding a subwoofer would be nice for powerful bass, but the soundbar itself is more than enough to provide normal users with that intended rumble to movies and additional depth to the music.

To our surprise, the soundbar works extremely well as a music player as well as for movies. As mentioned above, the bass it possesses lends depth to the audio from the speakers while balancing its produce. This means that everything from the soft clunk of piano keys to the plucking noise of guitar strings is easily differentiated, giving layers of feedback that are truly a feast for the ears.

Since it is still an expensive speaker, the quality should live up to its price, or it would be a disaster for Bluesound. Fortunately, they belong to high-end audio qualities, so if you are looking for a soundbar that produces good audio without other accessories’ assistance, this should be good enough. Even at the high end, the soundbar manages to dish out the unparalleled sound, clear vocals, and punchy bass. Overall, the sound is expressive and refined, brilliantly natural, producing convincing musicality across the board.

At the price of $899.98, how does the Pulse Soundbar 2i stand against the competition?

The Sonos Arc is the most direct competitor, offering the same promises with multiroom connectivity. As a bonus, the Arc is $100 less expensive and supports Dolby Atmos.

The Pulse 2i speaker is a large, bulky soundbox with sketchy voice control and a confounding app. But if fidelity, clarity, excellent sound, paired with a full array of features, tonnes of tweakable settings, and every connection considerably are more important to your set up, this BlueSound system will fulfil all your needs and then some.

Like the 2i, the Kubik One is a soundbar that fancies itself an entire music system. It’s a bit of a buffer, and it’s almost as expensive. It gives away all that multi-room goodness and voice-control convenience to the Bluesound, but it’s available in several jaunty finishes that make it seem less imposing.

And there’s no doubt the Dali is the more convincing audio performer – it’s even more transparent and revealing than the 2i, and it has greater dynamic capability too.

Should you Buy the Bluesound – Pulse Soundbar 2i?

Overall, if you are willing to compromise space for quality, this should make your shortlist because its audio quality is much better than its competitors. Considering the breadth of features and connectivity on offer with the Pulse Soundbar 2i, if you can get over the troublesome UI issues, you are good to go. If you want a multi-room soundbar of this size with hi-res audio compatibility, it isn’t just that your hands are tied: Bluesound here offers a generally positive and entertaining performance.

Get the latest Bluesound – Pulse Soundbar 2i from Bestbuy.com.